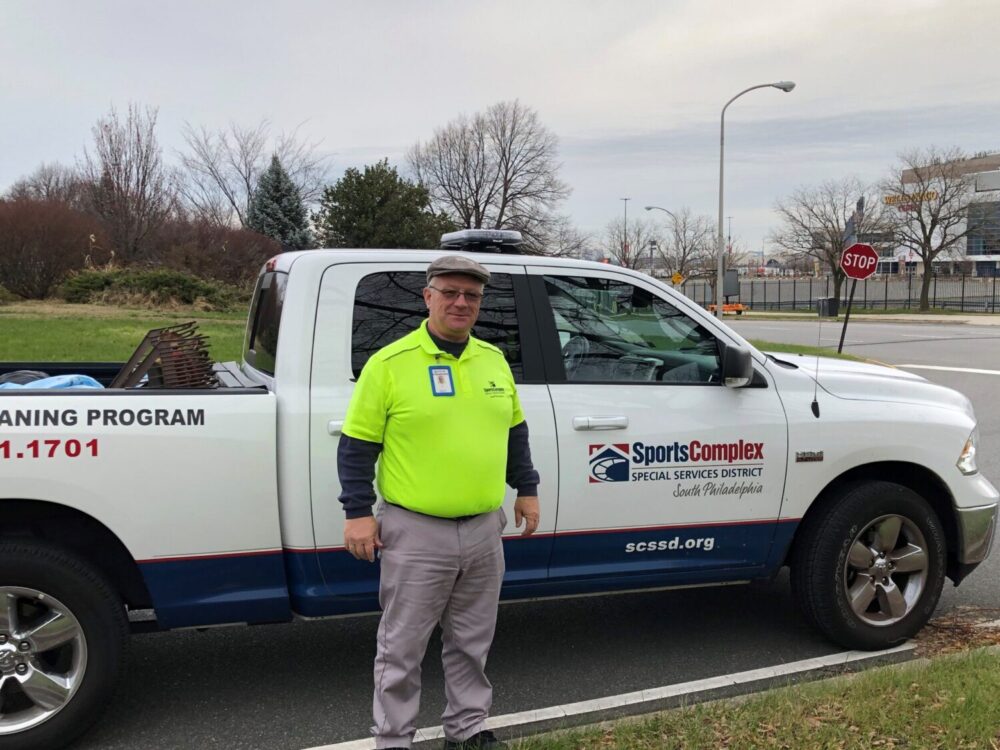 Tom Blair woke up one day not knowing he would later become a hero for a little girl.

It was the day before Thanksgiving, Wednesday, November 25, 2020, and the SCSSD Cleaning Team was just about to begin their litter pick of the Broad Street corridor.  In the next moments, an amazing experience took place that none of them would ever forget.

Shortly after the crew exited the pickup trucks and began unloading their equipment, a car sped down the I-95 ramp and proceeded the wrong way onto one of the turnarounds on Broad Street.  Tom Blair, the Cleaning Team Operations Manager, waved his arms to alert the driver they were going the wrong way.  The car stopped near the crew, and a woman got out of the vehicle.  Frantically, she shouted, “does anyone know CPR, I need help!”.  Tom Blair, a volunteer firefighter in Darby Borough for over 40 years, responded “Yes, I do, what is wrong?”  The woman went to the backseat of the car and carried out a small child, about two years old.  The little girl was not breathing, and her lips were blue and lay lifeless in her mother’s arms.  Without hesitation, Tom took the child and began to perform CPR.  As Tom continued gentle breaths and back blows, the mother called 911, but was not familiar with the Sports Complex area. Tom helped the mother speak to emergency responders, giving them their exact location.

Tom continued with CPR, and the little girl began to regain some color in her face and move slightly.  After a short time, the Fire Department and Emergency Medics arrived on the scene.  Tom gave an update to the first responders and they took over.  The mother tearfully thanked Tom, saying “I owe you my daughter’s life, you saved her.”  The little girl was taken in an ambulance to Children’s Hospital of Philadelphia.  A few days later, Tom received an update from officials that the little girl was back home and was doing OK.

Everyone at the Sports Complex Special Services District is extremely proud of Tom Blair for his bravery and willingness to assist someone in great need, without hesitation.  We are thankful for Tom’s daily contributions to the Cleaning Team program and the leadership he displays.  In a year full of challenges, and especially during the holiday season, it is important for us to recognize moments that define human kindness.